Last day of the season is October 29th! 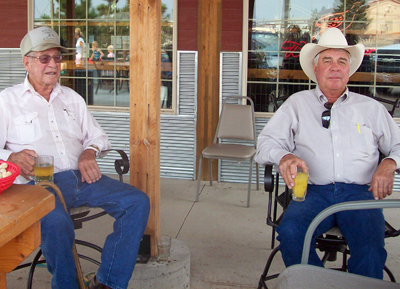 When Richard Hullinger bought 14 acres at Exit 170 back in 1969 he had no plans for an attraction. In 1972 a gas station was built at this location along with forming an idea of an old west attraction. Later, an additional 80 acres was purchased.

About that time a movie company came to a small town nearby to film an 1880 era movie. A main street set was constructed from old buildings and a number of Indian relics and antiques were borrowed from Clarence Hullinger, Richard’s father. Winter set in and the filming was abandoned. The movie company returned home giving the main street set to Clarence for the use of his artifacts. The movie set was moved to the 80 acres and the 1880 TOWN was born!

Along with the beginning of the 1880 TOWN began years of collecting what is now an authentic 1880 to 1920 era town from buildings to contents. Clarence and Richard have kept historical value on an equal balance with public appeal, choosing buildings that not only interesting to look at but are also historically correct for an early South Dakota town. The displays and buildings range from Indian relics from the 1970’s to the fourteen-sided barn built in 1919.

The tour of the town begins here. The barn boasts an automated hay and manure handling system. It took three days and thousands of dollars to move the barn the 45 miles from its original location south of Draper, SD. In the barn you will see fine antique buggies, toys, stalls with horses in them and a working, turn of the century, coinola, saloon piano from Deadwood.

From the barn, the whole town lies before you in a beautiful panoramic view! The first building on the north side is the Vanishing Prairie Museum. The museum was built to house the more valuable collections, many from the General Custer period. Items displayed are a pair of boots and an old army saddlebag from the Custer battlefield that were found at an Indian campsite, parade helmets worn by U.S. Cavalry Indian Scouts with the crossed arrow insignia, Indian dolls, arrowheads, a complete authentic cowboy outfit, photographs and selected interiors of fine Dakota homes. The collection also includes Buffalo Bill items and a tribute to the late Casey Tibbs, 9 time World Champion Rodeo Cowboy.

The Dakota Hotel was moved from Draper, SD. Built in 1910, it still carries the scars made by cowboys’ spurs on the staircase. The Gardel & Walker Livery Barn holds a variety of early engines and two wagons from the Indian war era. On an open lot next to the livery is the antique machinery display.

St. Stephan’s Church, built in 1915, was moved from Dixon, South Dakota, with everything intact, from the stained glass windows to the bell (which along with the school and fire bell, you are free to ring).

The C&N Depot, Express Agency, and Telegraph Office was relocated from Gettysburg, SD. It is filled with railroad equipment right down to a piece of wood with “Tex K.T.” carved by the king tramp in 1927.

The town hall which came from Belvidere was renovated in 1984 and the film “Love for the Land” can be seen throughout the day. Step inside the back door to see the Mayor’s office. Next door are the lumber yard and pioneer home.

The one-room schoolhouse will bring back many memories for those who were lucky enough to attend one. Ring the bell and step inside to see the ink-well desks, textbooks, reciting bench and roll-up maps. Up front by the blackboard sits the huge stove that never did heat the back of the room and the view through the windows is still the same beautiful prairie that lured the attention from many young students’ studies.

About a quarter of a mile east of the town is a homestead complete with windmill, corrals, barn, house and of course, outhouse.

This history of the 1880 TOWN is just a snap shot of what you’ll see and experience while visiting our attraction. We are constantly updating and adding items and buildings to the collection so make sure and plan to visit us soon!